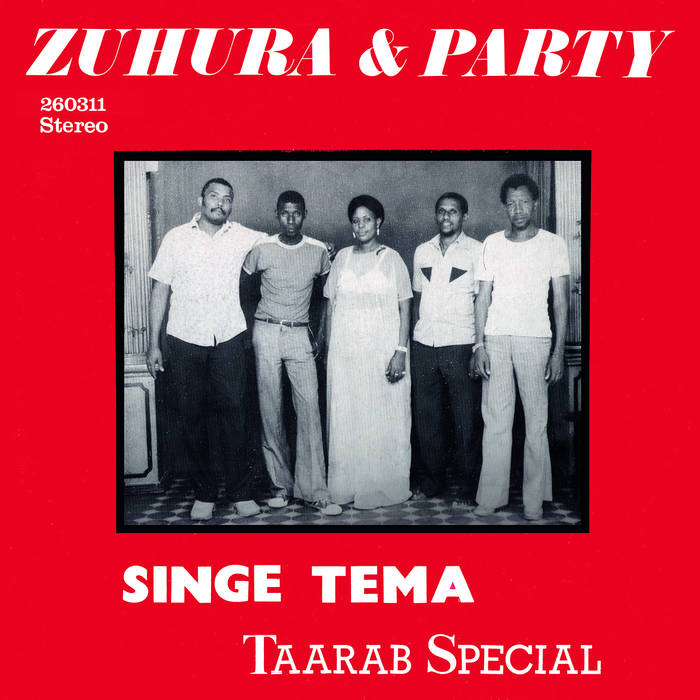 Alsarah 5000 Brilliant comp. Zuhura is a LEGEND!!! what a voice!! Favorite track: Ya Zamani.

The return of the Zanzibara series: a Deep Taarab masterpiece from legendary singer Zuhura Swaleh, recorded in Nairobi in 1981.

Zuhura Swaleh & Party rose to fame on the Mombasa scene in the 1970s with a new fast-paced taarab style based on local ngoma rhythms and its melodies. The group sound was lead by an electrically amplified tashkota (actually a Japanese instrument correctly spelled as taishokoto), its shape best rendered as being a kind of “typewriter banjo”—a trio of strings shorted by way of the typewriter-style keys with the left hand, while the right hand strums the strings with a plectrum. The resulting sound is resembling a mix of electric guitar, slide guitar and sitar, with the possibility of making the metal keys hammer and slide on the strings, and the unison-tuned strings producing some kind of frequency modulation.

Zuhura’s chakacha-styled taarab sound—so-called after the leading ngoma rhythm it is often based on—along with the stingy lyrics she preferred became popular far and wide up and down the coast inspiring and giving rise to local genres like the Zanzibar chakacha or Dar es Salaam’s Zaramo mchiriku. Voicing and propagating women’s concerns and the no-nonsense way of speaking out openly also helped pave the way for the new “modern taarab” that came to fore in the 1990s with singers Malika and then Khadija Kopa and the like in Dar es Salaam.

Zuhura Swaleh was born in Nairobi in 1947. She grew up in Pumwani, a predominantly Muslim area of Kenya’s capital city. Already as a small kid her singing voice stood out in the madrasa (Quranic school) and later on in the school choir of the primary schook she attended. As was customary at the time her family arranged for a marriage when she was barely 15. With her newly-wed husband she moved to Lamu town on the Northern Kenya Coast. While the marriage was not a happy one, she injoyed the Lamu women’s culture of poetry and song: wedding celebrations and the many ngoma dances that were performed. The marriage did not last long hwoever, she moved back to Nairobi and was soon recording and performing with some of Nairobi’s best-loved songsters and dance bands. She records songs with Charles Ssonko’s group, also works with other well-known artists like Nashil Pichen and David Amunga. Well remembered to this day is her acting and singing along with Fadhili William (of “Malaika” fame) in the feature film “Mrembo”. Nevertheless, her heart is not with these types of music, she quits and after a while remarries one Abubakar Mohamed, who is a taarab singer and also works for the VOK radio. She joins her husband’s group and they perform at Swahili weddings in Nairobi, upcountry Kenya and Uganda, and also very often in Malindi where part of her and her husband’s families originate. It is on her trips to the coast that she makes contact with the local taarab scenes. After another divorce in 1971 she comes to live in Mombasa and tries to start her own group with some musicians from Aswadru, a Malindi-based group with whom she had occasionally performed at weddings while there.

In Mombasa she also links up with existing groups in order to gain more exposure and also possibly to establish her name as a recording artist. She thus briefly joins Zein Musical Party, led by ‘ud virtuoso and singer Zein l’Abdin, with whom she makes her initial recordings for the Mombasa-based Mzuri label, “Mpenzi Azizi” and “Kurata Ayini” among others [re-released on Zanzibara 2 (Buda Musique)]. Meanwhile she had met tashkota player Mohamed Kombo, who would become the musical director of her group and stay with her until his death in 1990s. Kombo also brings in his former band mate from Kidogo Orchestra Juma Khamis “Bajees” on accordion (later keyboard).

A lot of coastal taarab from the 1950s to the 1970s had been obsessed with Bollywood cinema, copying Indian voicings and vocal style, sometimes whole songs which were translated to have Swahili language lyrics. Some of Mombasa’s leading artists worked in this kind of style, 1950s Yasseen, as well as Juma Bhalo who rose to fame in the 1960s.

Zuhura was looking for a more down-home approach in developing her group’s style: She had liked the Lamu ngoma like vugo and the whole tradition of female poetry that came along with it. In the 1960s another female wedding dance had risen to prominence – chakacha; a fast-paced rhythm for dancing and grinding the hips it also featured very ribald lyrics with lots of sexual innuendo. It was on the basis of these ngoma rhythms and melodies that Zuhura and Mohamed Kombo developed the group’s distinct style. Kombo would stay at Zuhura’s house just practicing the tashkota, when Zuhura heard something she liked, they tried to jot it down for rehearsal later on with the group.

At the same time Zuhura also honed her verbal skills. Taarab’s distinctive feature is the link to classical Swahili poetry with its canon of styles, intricate rhyming patterns and syllable counts. Here Zuhura sought out the help of the famous poet Sheikh Ahmed Nabhany whom she had befriended while staying in Malindi. Nabhany helped her develop and perfect her own songs, which she wrote together with Mohamed Kombo. More inspiration and support came from female Mombasa poet Khuleita Muhashamy, other poems to be set to music were handed to the group by family and friends.

Zuhura & Party’s chakacha-style taarab rose to fame throughout the 1970s, leading to invitations for performances all over Kenya, Tanzania and Uganda. In Dar es Salaam a local chakacha-styled and thus named genre rose to prominence, including Zaramo drums and percussion, Indian harmonium or accordion as the sole lead instrument. Imitating Zuhura’s or some of her follower’s Mombasa songs the style was performed as a street entertainment; in the 1990s with the advent of cheap battery-driven Casio keyboards and megaphones as amplification Dar es Salaam chakacha morphed into the well-known mchiriku. An earlier incarnation of the later to become internationally famous Jagwa Music group actually called itself Mvita Orchestra [the Mombasa Orchestra] into the 1990s.

Following her initial recordings with Zein Musical Party, Zuhura recorded more sides for the Mzuri label under her own name. 45s were on the way out though among taarab afficionados embracing the cassette format and possibilities of longer songs. Actually for the roughly 4 minutes possible on a single most of the recorded songs had previously been shortened to fit. Mzuri recorded a number of her songs in the 2nd half of the 1970s, however the company went out of business before they were released. Two tracks from those recordings are to be found on Zanzibara 2: “Ya Zamani” and “Nimechoka Kulima” [tracks 3, 15 respectively]. In the 1970s Zuhura started to record also for Mombasa’s leading cassette store Mbwana Radio Service, dozens of cassettes, hundreds of songs to this day.

While playing a wedding in Nairobi in 1981 Zuhura & Party were approached by the local Polygram studio to record some songs and to try their hand at taarab. The initial 33rpm longplay records did not catch on however, as the lp format was not suited to the tiny portable record players in use in Kenya back then. Also the record industry as a whole collapsed in the wake of the 1982 coup d’état attempt and the resulting economical slump. Only few records were pressed and have since become collectors items. Locally the songs survived and remained popular as pirated dubs (first on cassette now on CDR).

In 1991 Zuhura was invited to perform at the Heimatklänge Festival in Berlin along with Maulidi Juma and Maulidi Musical Party. The festival was themed around Bollywood cinema, hence the invitation of Maulidi Musical Party, it was Zuhura voice however and the infectious rhythms of her songs which stole to show. While in Berlin Zuhura went into the studio to record some of her most famous songs for GlobeStyle Records [CD Jino la Pembe]. A similar line-up went to tour again in Europe [Belgium, Germany, Netherlands, Switzerland] in 1995. In 2000, Zuhura & Party played in Belgium and Netherlands, and in 2004 she presented herself on stage at Théâtre de la Ville in Paris as a featured singer with Mombasa Party. A US tour followed in the autumn of 2006.

The Zanzibara series celebrates the Swahili music of the East African coast, from Lamu, Mombasa, Tanga, Dar es Salaam, Zanzibar and the Comoros. The series features both previously un-reissued archival recordings from the 1920s-1980s and contemporary recordings. The series is curated by Werner Graebner. ... more

Bandcamp Daily  your guide to the world of Bandcamp